One of the new DC Comics characters that season one of CBS’ upcoming Supergirl TV show will be introducing is Red Tornado which was announced at last month’s TCA, as well as his creator, Dr. T.O. Morrow. Today, we finally have the answer to who will be playing those characters on the show as Comic Book exclusively revealed that Salem actor Iddo Goldberg has been cast to play both the heroic android and his villainous creator.

Here is how WBTV described the TV show’s take on the characters, to Comic Book:

“Red Tornado is the most advanced android the world has ever seen. Designed by scientist T.O. Morrow for the U.S. Army as the ultimate superweapon, he soon becomes sentient, posing a grave danger to National City — including the people Supergirl cares about most.”

We don’t know yet when we will be meeting Red Tornado as well as T.O. Morrow, but the producers have said recently that it will be within the first 9 episodes of Supergirl This is definitely an interesting casting idea to have one actor play both these characters and it will be intriguing to see how they visually presents Red Torando, which will mostly be very faithful to the comics.

Other characters that we will be meeting on the show is General Sam Lane (father of Lucy Lane who will be played by Jenna Dewan-Tatum in episode 3), Non, Livewire (played by Brit Morgan), Hellgrammite (played by Justice Leak), as well as Maxwell Lord (played by Peter Facinelli). And knowing these show-runners, we are mostly going to hear more announcements about more DC Comics characters coming to Supergirl by the time the show premieres in October. 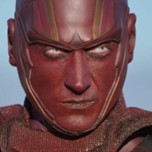 September 19, 2015 - Comments Off on Iddo Goldberg as Red Tornado on Supergirl